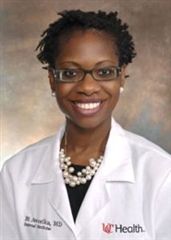 Bi Ade Awosika, MD, FACP FHM ’98 graduated from Trinity with an International Baccalaureate Diploma. Upon graduation Bi attended Stanford University and received a BA in human biology with a minor in French. She matriculated to the University of Illinois Chicago School of Internal Medicine earning her Doctor of Medicine in 2008. After a residency in internal medicine at Boston University Medical School through 2011 and remaining as chief resident for the 2011-2012 academic year, Bi joined the faculty at the Medstar Georgetown University Hospital in Washington, DC serving as an academic hospitalist in the Department of Medicine. At Medstar, Bi was involved in leadership and education and received many awards and honors for her dedication. She was awarded the hospital’s Associate of the Month for serving the goals of the hospital’s philosophy “cura personalis” meaning caring for the whole being.

Her career path led her to the University of Cincinnati Health and the College of Medicine in the fall of 2016, where she currently is faculty in the Section of Hospital Medicine and the Division of General Internal Medicine, practicing as an academic hospitalist within the University Of Cincinnati Medical Center. Since then she continues to pursue her interests in hospital and educational initiatives as Chair of the Resident Clinical Competency Committee reviewing the performance of trainees and serving as an advisor, while being a member of the Patient Experience and Medical Grand Rounds Committees. Dr. Awosika has and continues to serve as Conference Chair for the third Annual University of Cincinnati General Internal Medicine Updates Conference. For her many contributions to the field of academic medicine and teaching, she was awarded Fellow With Distinction status in two premier national medical societies, the American College of Physicians and Society of Hospital Medicine. Additionally, she was featured on MedPage Today in a segment highlighting physicians under age 40 discussing prevention of burnout while pursuing career goals. Recently, Dr. Awosika was named a Forty Under 40 Leader by the Cincinnati Business Courier; an annual award recognizing young professionals who are building successful careers while also giving back within the various disciplines. She has also been selected as a “Bizwomen Headliner” honoree, a national award given to the top 800 women who made headlines in 2018.

Bi loves running, singing, watching musical theater, and engaging in community outreach while taking on various roles whether it be serving as a teacher in children’s ministry for her church or being a mentor to rising students and residents while they pursue personal and career goals. She teasures creating life’s adventures with her loving husband Wol, and her son, Adura , and two daughters, Olami and Funmi.