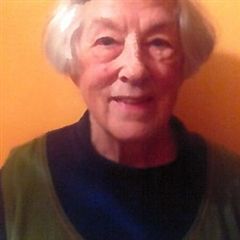 Gail Conmy Hafner ‘51 was born in 1933 in Fargo, North Dakota. At the age of two, her family moved to River Forest. Gail was educated by the Sinsinawa Dominican distinguishedsisters at St. Lukes, Trinity and Rosary College. Among the lessons she learned from the Sisters were the importance of works of mercy and also the obligations of privilege. She has always been grateful for the charism of the Sinsinawa Dominican sisters. Gail was active in student government at Trinity and Rosary. She also became involved in the Young Christian Student Movement thanks to Sr. Reynoldine. She volunteered for the organization until her marriage to her husband Yates, sixty years ago.

In 1983 she earned a Legal assistant Certificate at Roosevelt University in Detroit. This certification allowed her to become a crime victim advocate in the County Court. While in Detroit, Gail also taught pre-GED students for the Detroit School Board.

Retirement has allowed travel, more reading time, sacred scripture study and volunteering at various literacy centers. It also allows her more time to spend with her three children and four grandsons.
Back