There is a wealth of information that can be found here but if you still have any questions, please feel free to contact the office.

THS Quick News
These reviews are written by Trinity readers.   All books are available in the Library and for purchase through Amazon. 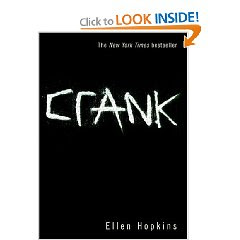 The novel Crank by Ellen Hopkins is a close look at drug addictions and what the monster, called Crank, does to one’s body once it has been introduced. The main character, Kristina, is sent to her father’s house in Albuquerque, where she meets Adam. Kristina’s trip takes a wrong turn when Adam introduces her to the monster. The drug took control of every part of her body, even convincing her that she was someone else. When using the drug and meeting new people, Kristina becomes “Bree”. Crank is a phenomenal novel that teaches the reader what can happen if someone doesn’t think twice about becoming friends with “the monster.”  Crank is a remarkable novel that is a must-read for all ages. It is by far one of the best novels I have ever read. It was full of so much truth and dull moments never existed. The plot always kept me wanting more, and I never wanted to put the book down. Since I read Crank within a day, I never did put the book down. The author wrote specifically about her daughter, who is Kristina in the book. This is just one of the reasons the novel is so interesting because it is an honest and genuine story. Because Crank was such a great novel, I plan to read the sequel Glass. I recommend this novel to anyone who would like to read a fascinating novel involving real life situations. Crank is a great novel that keeps the reader on their toes with anxiousness to know what will happen next. It is a real page turner and is really interesting. If reading appears boring to someone, they obviously have not read Crank. For all readers out there, once this novel is picked up, it is hard to put down.
-Taylor
Such a Pretty Girl

Such a Pretty Girl is about a fifteen year old girl named Meredith. Her father molested her as a little girl. The court promised her that her father would be in jail until she turned eighteen but he ends up getting out three years earlier. Her mother does not see what her father did was wrong. Her mother thinks it was just a mistake, Meredith knows her father is a child molester. Meredith is dating Andy who was another one of her dad’s victims. Meredith feels like Andy is the only person she can count on. One day Meredith’s mother slaps her in front of Meredith’s grandmother. Her grandmother will not allow her to live with her mother so Meredith moves in with her. Meredith makes a plan, and moves back home. She hides cameras all around her house because she wanted her dad to get caught for good. Sure enough, he did. Meredith takes the tapes to court and her father gets put back in jail for life.I loved the book. I think Meredith is a great character in the book and what she did was awesome. I would never be able to deal with the things she did. I found myself wanting to go in the book and kill her dad for her. I also wanted to talk some sense into her mother. I didn’t understand why she was in denial the whole time. Everyone saw his personality qualities except for her. I loved the book and I think Meredith is a great character. I’m so glad she stuck up for herself. She deserved it after all of that time. I felt really sorry for her at the beginning of the book but at the end I was really excited that her life was actually good.I would definitely recommend this book to others. It showed me all the good things I have in my life and how lucky I am. I learned how great my family is. If you like reading darker books this is the book for you. I think girls should read it because it is not the usual love story. This book is actually real and believable. I think it was one of my favorite books.
-Rachael

The award winning novel, Sold, is a moving tale by Patricia McCormick. It is a depressing story of a thirteen-year old girl named Lakshmi who lives with her mother, stepfather, and baby brother. Laskshmi’s best friend is a white and black spotted goat. Later her stepfather finds her a job as a maid for a rich woman, which turns out to be a prostitution house. She was there for a very long time and is living in a nightmare. Lakshmi must endure the torture of being used for months before she is able to return home. Her life is both devastating and destructive to her future.It is really distressing how a thirteen-year old girl gets sold into prostitution and she has sex with men she doesn’t even know. Lakshmi’s life is very scary. This was an exceptional book because it’s about the controversial issue of prostitution. It gave its readers a glimpse of culture in Nepal, India.

My opinion about this book is to have older students read it, not grammar school students. The issues mentioned are too graphic for immature readers. I would recommend this book for a health class because it focuses around the topic of sex at young age. The book would be good to start discussions and debates about this issue.
-Daphne 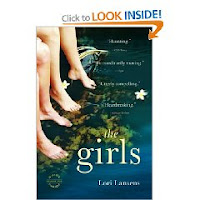 The Girls by Lori Lansens is about two girls that are caniopagus twins named Ruby and Rose. They were born connected at the head in the middle of tornado. Lovely Darlen, the nurse who delivered the girls, instantly became in love with them. When the mother and father disappear, Lovely and her husband adopt the girls and raise them as their own. The girls try to live the most normal life possible; as the girls develop their own personalities they learn how to overcome their weakness and to help on another out as much as possible.

The Girls is an extraordinary and heart-breaking book that really gets you to appreciate the things you have in life. Lori Lansens does an excellent job really showing difficulties the girls go though. Within the first page the reader sees the suffering and pain the girls go though. Lori Lansens beautiful writes the chapters with points of view from Ruby and Rose. Throughout the chapters you see utterly compelling bits of poetry such as “I have never looked into my sister’s eyes. I have never bathed alone. I have never stood in the grass at night and raised my arms to a beguiling moon. I’ve never used an airplane bathroom. Or worn a hat. Or been kissed like that. I’ve never driven a car. Or slept though the night. Never a private talk. Or a solo walk. I’ve never climbed a tree. Or faded in a crowd. So many things I’ve never done, but oh, how I’ve been loved. And, if such things were to be, I’d live a thousand lives as me, to be loved exponentially.”

I would recommend this book to anyone loves books about kindness, love, and the mishaps and miracles of life. This book is perfect for anyone loves a heartrending but, blissful story filled poetry and different views on same topic. I would say that this book is defiantly in my top five favorite books because the book is so well written and intriguing.

I’m thankful for this book!

The Stranger by Albert Camus

The Kite Runner by Khaled Hosseini

I love The Kite Runner because it not only made me emotional, but left me asking for more. This book taught me about the Islamic religion and also family bonds.- AnupamaIt gave me insight on another culture’s struggles and triumphs.- Carina

Megan Meade’s Guide to the McGowan Boys by Kate Brian

…The authors write with a witty style that enhanced the main character’s personality….made it a funny and enjoyable book.- Sophie

A Corner of the Universe by Ann Martin

…a sad but amazing and inspirational book. One of the characters, Adam, is someone with special needs..his tory along with the effect of his presence on others is truly inspirational. – Julie

It taught me so much about the role women play in the Middle East. The relationships portrayed in this book were beautiful. I finished it in two days.
– Bitta

Song of the Lioness Quartet by Tamora Pierce

This series tells the classic story of a girl proving her worth with men but it has a very interesting plot that makes it enjoyable.
– Mary

It’s the best romance I’ve ever read. It’s enthralling, suspenseful and full of action. It’s a book I could read over and over. I can’t put it down. – Monique

I love the story of Bella and Edward’s romance and read all fourbooks, but I liked Twilight the best.- Dr. B.

(Eclipse is) the most exciting in the Twilightseries and has a very full plot. It’s read for reasons besides having amovie.- Anon